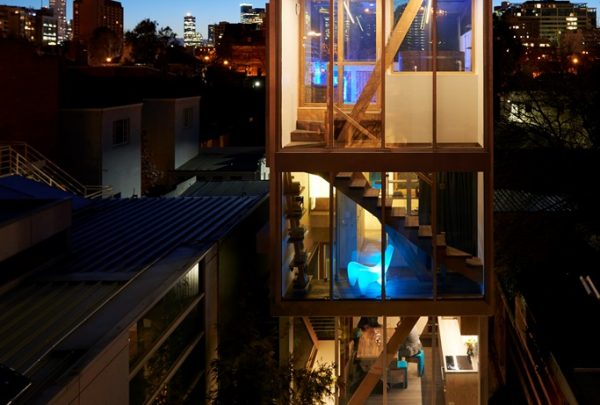 On a tiny footprint of literally 5 x 4m sits this thoughtful and sustainable development by Ralph Alphonso and the ‘Barley Store’.

With a desire to procure the right materials that reduce the carbon footprint of a building and spurred on with the idea of creating one of the worlds most environmentally friendly buildings, Ralph needed materials that would not only store carbon within, he also needed a product that required little to no processing while lasting the test of time.

In a different part of the state, on a hunt to increase the durability of our own species, ASH & Fishers Timber Preservation had been working on an innovative water-based H3 treatment that could fully penetrate Victorian Ash hardwood to greatly increase the external durability of the GoodWood range of sustainably managed timbers. We had found a match.

Being such a unique, inner-city dwelling set on an unusually small footprint in Hayes Lane, East Melbourne. The entire 5×4 build is “designed, built and powered with passive and active eco-driven processes, materials and performance considerations” says the 5×4 webpage. “The 5×4 Hayes Lane Project demonstrates  and encourages discussion around sustainable living, a healthy form of densification in the city of Melbourne and how to achieve it through best practice design and living.

It uses the One Planet Living® principles as its guide for the physical design of the project, adaptation around behaviour to reduce ecological footprints in a city, and acts as a platform to disseminate progress and learnings from the process.” Utilizing a range of products from the ASH operation, the 5×4 project was quickly turning into the hardwood showroom of the future. H3 treated cladding at 165 x 19 was used to cover the external walls, an early form of our AlpineOak was created to bring cover to the flooring, windows, bench top and stair cases. SupaSpan structural products such as SUPA17 & SUPALAM were used in the prefabricated floor cassettes and walls and finally, IronAsh screening finished the touches nicely as the new treatment became available in an invisible formulation.

With a high level of consideration and design, 5×4 house has generated plenty of interest both at home and internationally. Grand Designs Australia followed the story for an episode which aired November 2015, Sustainable Living Melbourne features the project on their website, The World Sustainability Conference held in Barcelona in 2015 presented the 5 x 4 project, a feature was written in The Age newspaper and Well Being Magazine and on it goes…

The ‘5×4 Hayes Lane Project,’ deserves all the attention it receives. If you are looking use the same timber as the 5×4 house in Hayes Lane, make contact with ASH today.