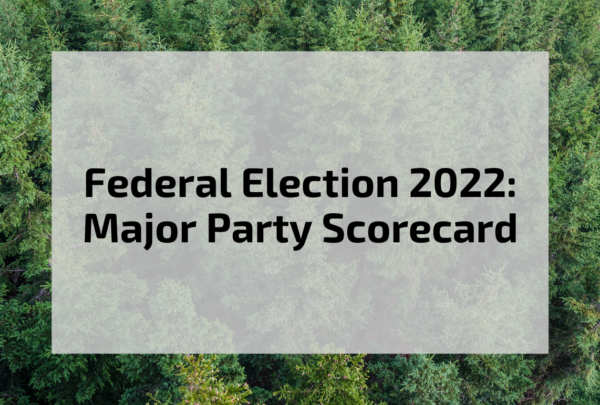 With Australians going to the polls to elect a new federal government on May 21st, the Australian Forest Products Association (AFPA) have analysed the differences between the two major political parties and their vision for forest industries. If you’re interested to see how they measure up ahead of the 2022 Federal Election, read on!

An analysis by the Australian Forest Products Association (AFPA) of the major Parties’ forest industry policy commitments has found that the Coalition has put forward the most comprehensive vision for forestry industries, with record investment that addresses many of the measures outlined in the sector’s Growth Plan.

AFPA Chair Greg McCormack said this election campaign has been the most successful for Australia’s forest industries in living memory, with both the Coalition and Labor committing more than $300 million in new investment for forest industries to support innovation, boost timber manufacturing capacity and deliver new timber plantations to progress the One Billion trees goal, while helping ease product supply pressures.

“AFPA has scored the Coalition’s forest industries plan five stars out of five ahead of Labor at four stars because of the leadership and prominence the Coalition has given forest industry policy, putting it at the centre of its economic and manufacturing policies,” Greg McCormack said. 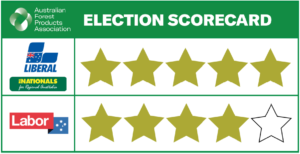 “The AFPA Board believes the Coalition’s policy initiative and early sector engagement on forest industry policy, framed by a cohesive narrative that positions Australia’s sustainable forest industries as a growth sector that will be central to a low-emission circular bio-economy, aligns strongly with our own vision for the future.”

Since February the Coalition – at press conferences fronted by the Prime Minister and Assistant Minister for Forestry and Fisheries, Senator Jonno Duniam – has pledged more than $300 million in new funding for forest industries that directly addresses the key policy priorities identified in AFPA’s ‘Plan for Growth’, including more than $200 million that has been provided for in the 2022-23 Budget, setting up a genuine contest with Labor on forestry policy this election.
These include:

The Labor Party has subsequently matched all of the Coalition’s funding commitments and committed to honouring the programs already provided for in the Budget.

“The AFPA Board also acknowledges the strong support and competitive policy offerings from Labor, led by Shadow Minister for Agriculture Julie Collins, which positions our sector well to deliver on our Plan for Growth in partnership with the next Government, regardless of the election outcome,” Greg McCormack said.

“The bipartisan support for the funding commitments is of course welcome. However, above all else, our forest industries need policy and resource certainty, that will translate to cost certainty for consumers. Just as important are the commitments from both sides to progress the goal of growing our timber plantation estate by one billion trees by 2030 to meet Australia’s future timber and wood fibre needs, and to secure our native hardwood timber industries by supporting Regional Forest Agreements and opposing any further forest ‘lock-ups’.

“Pleasingly, both the Coalition and Labor have also committed to fast-tracking the removal of regulatory ‘water rule’ barriers in the Emissions Reduction Fund in five key forestry regions currently excluded from accessing carbon credits.”

There are also points of difference worth highlighting: The Coalition has promised to work with state governments to establish ‘permanent timber production areas’ to provide greater resource certainty and to counter devastating decisions by state Labor Governments in Victoria and WA to end native forestry. Meanwhile, Labor has committed $10 million for skills and training in forest industries. The Coalition has also committed there would be no carbon liability for businesses affected by the ‘safeguard mechanism’, while under Labor’s climate policy, the Clean Energy Regulator would be directed to take into account facilities’ exposure to overseas competition which didn’t face the same carbon regulations when determining facilities liabilities.

Greg McCormack said the scores awarded to the parties come with the caveat that there is an expectation that they will deliver on these commitments in partnership with industry if elected, in particular expediting the removal of the regulatory barriers in the ERF.

“The ambition for our industries shown by the major parties is to be commended. However, AFPA will be judging the next government on delivery of these commitments. As Australia grapples with timber shortages and increasing wood fibre demand globally it is in Australia’s interests that our forest industries thrive.”